the most beautiful drawing in the world 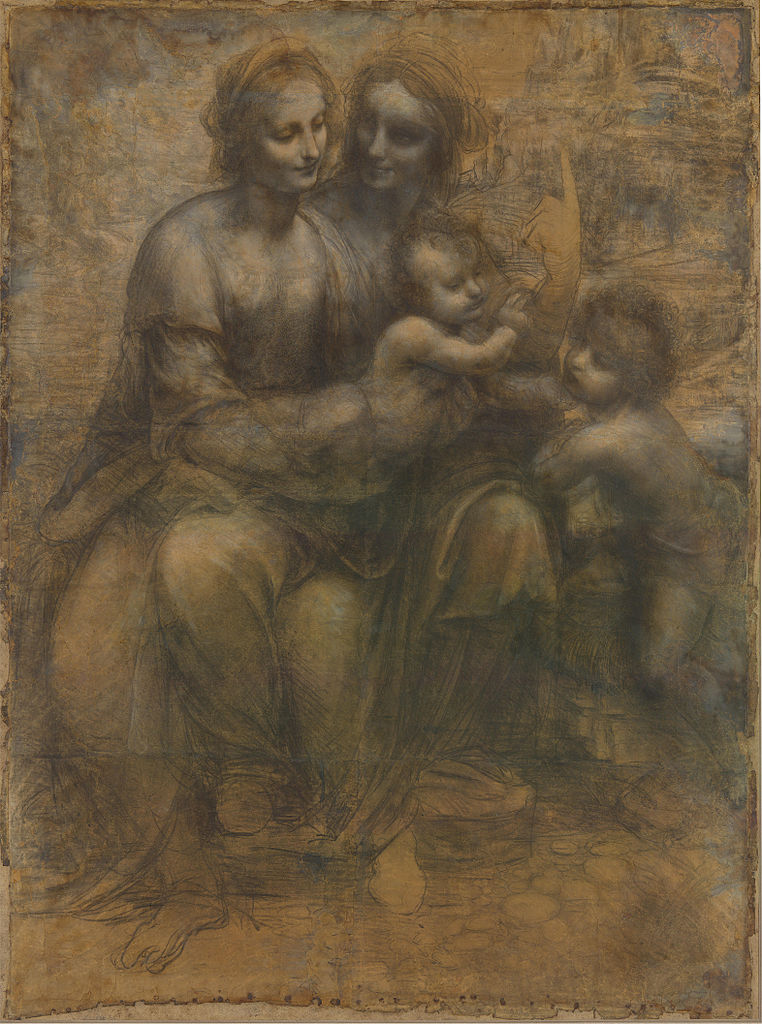 I’m sure I’ve said it before, but why not say it again? There are thousands and thousands of miraculously executed drawings in the world, but this is the most beautiful drawing in existence.

And it’s not because it is a work of genius. The Burlington cartoon doesn’t have the flourishes of mere talent. There are no elegant contours drawn in a single unhesitating stroke, no clever indications that the mind fills in. Leonardo thought and rethought every surface. Look at Mary’s right foot, on the far left, and you can see the first thought, and the second, and, firmly, the third. They’re not corrections, as such — he obviously understands the foot, and is capable of drawing a foot — but he’s considering it.

Take a look, in the large version, at the darkest areas between Anne’s legs and Mary’s. Can you feel the rhythm of those strokes? They’re neither careless nor painstaking. He’s not taking overmuch time, but he’s there, he’s aware of them.

And, moving still further up, look at the chalked sections. Sfumato is a word usually applied to paintings, but it’s the only word for the hazy, impossibly gentle shading that seems to be part of the paper. He doesn’t let the blurring get away from him — smudging is a very slippery slope — but with a light hand, lets the charcoal sharpen edges. Look at the front of Mary’s nose, where the charcoal just bushed, like sweeping away a spot of dust — again, not just once, but twice again, with consideration.

The whole composition is a neat pyramid, leading the eye from bottom to top, to the faces, where the action is. And it all seems both human and heavenly. They all seem relaxed, engaged but nowhere tense. Look at Jesus, spread superman-style and blessing his cousin with the same manner as someone thoughtfully brushing their teeth.

And just above his pudgy hand is Anne’s, breaking the pyramid, pointing up to heaven, into the boys’ future — and solid, positive, and too-real among all the smoky shapes. That sudden and striking intrusion of actually blank paper is a reminder of how utterly seamlessly the drawing moves from contour sketch at the bottom to shading so fully realized it’s hard not to imagine color. There is no moment in between that is awkward or inconsiderate.

All that is just technical observation though — what makes it the most beautiful drawing is that there is no place, not one inch, where my eyes can fall that they are not provided with rich sustenance. There is no eye candy — this is heartier fare, like visual bread and wine. Nowhere can my eye rest except lovingly, and with the quiet knowledge that his eyes and mind had lingered there, too.